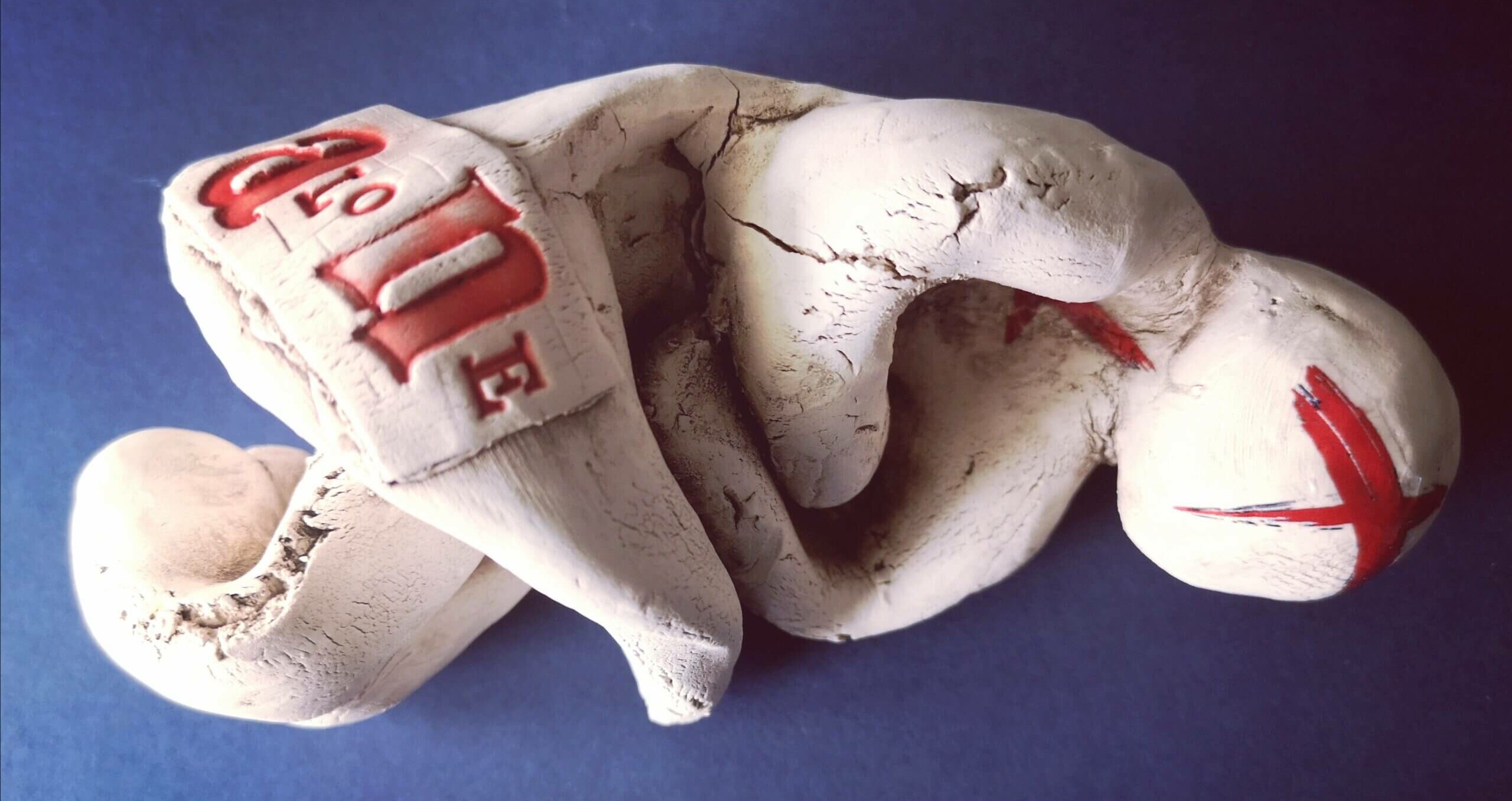 This vitally important art installation uses ceramics to depict the impact of domestic violence and abuse (DVA). To create works that reflect the physical, psychological and emotional effects of DVA, artist Angie Hardwick has collaborated with Dr Parveen Ali (Health Sciences School). In a series of consultations, survivors discussed those effects. The artworks incorporate their words, giving the installation a powerful immediacy which Angie hopes will help raise awareness of DVA and give hope to others.

The installation presents over 100 ceramic figures, 33 of which are ‘damaged’, – representing 33% of women that are affected by Domestic Abuse. The installation raises awareness and highlights the 5 areas of abuse. Verbal, sexual, physical, mental and coercive abuse.

Information on DVA and support that is available

Forms of Domestic Violence and Abuse

Examples of physical IPV include beating, kicking, slapping, pushing, shoving, dragging, biting, stabbing, scratching, hitting with or without a weapon, choking, threatening or using a gun, knife or any other weapon to cause physical suffering to the victim.

This refers to the use of behaviours to insult and control an intimate partner. Examples of psychological IPV may include criticising, name-calling, blackmailing, blaming, threatening to beat the victim or their children, restricting the victim’s movement, stalking, restricting access to health and social care, family and friends, humiliating and belittling the victim in public or private.

Financial or economic abuse refer to controlling a person’s ability to acquire, use and maintain their own money and resources. An abuser may prevent a women from working to earn her own money (not letting her go to work; sabotaging job interviews, taking the welfare benefits she is entitled to), using their money without consent, building up debts in her name, damaging her property and possessions, withholding maintenance payments etc.

A specific characteristic of IPV is the presence of coercive control which refers to a range of acts designed to make a person subordinate and/or dependent by isolating them from sources of support, exploiting their resources and capacities for personal gain, depriving them of the means needed for independence, resistance and escape and regulating their everyday behaviour. At times, coercive control is used in the absence of physical and sexual abuse and is more difficult to spot. It is now a criminal offence in some countries such as the UK. If the abuser is found guilty of coercively controlling the victim, they can be sentenced to up to 5 years in prison, made to pay a fine or both.

Due to the high prevalence of domestic violence and abuse, it is possible that people engaging with the installation may have been affected by domestic abuse themselves. This may be as children growing up in households were a parent was being abused, experiencing domestic abuse directly from a current or ex-partner, or supporting a friend or family member who is experiencing abuse.

We regret that we are unable to provide direct support. However, here is some information of sources of support.

There are a range of services available locally for women who are victims or survivors of domestic abuse. You can ring the Helpline on 0808 808 2241 for advice and support, to find out which services can help and to get in touch with other services. Or you can contact organisations directly.

In an emergency ring 999. Domestic abuse is taken very seriously by the police.