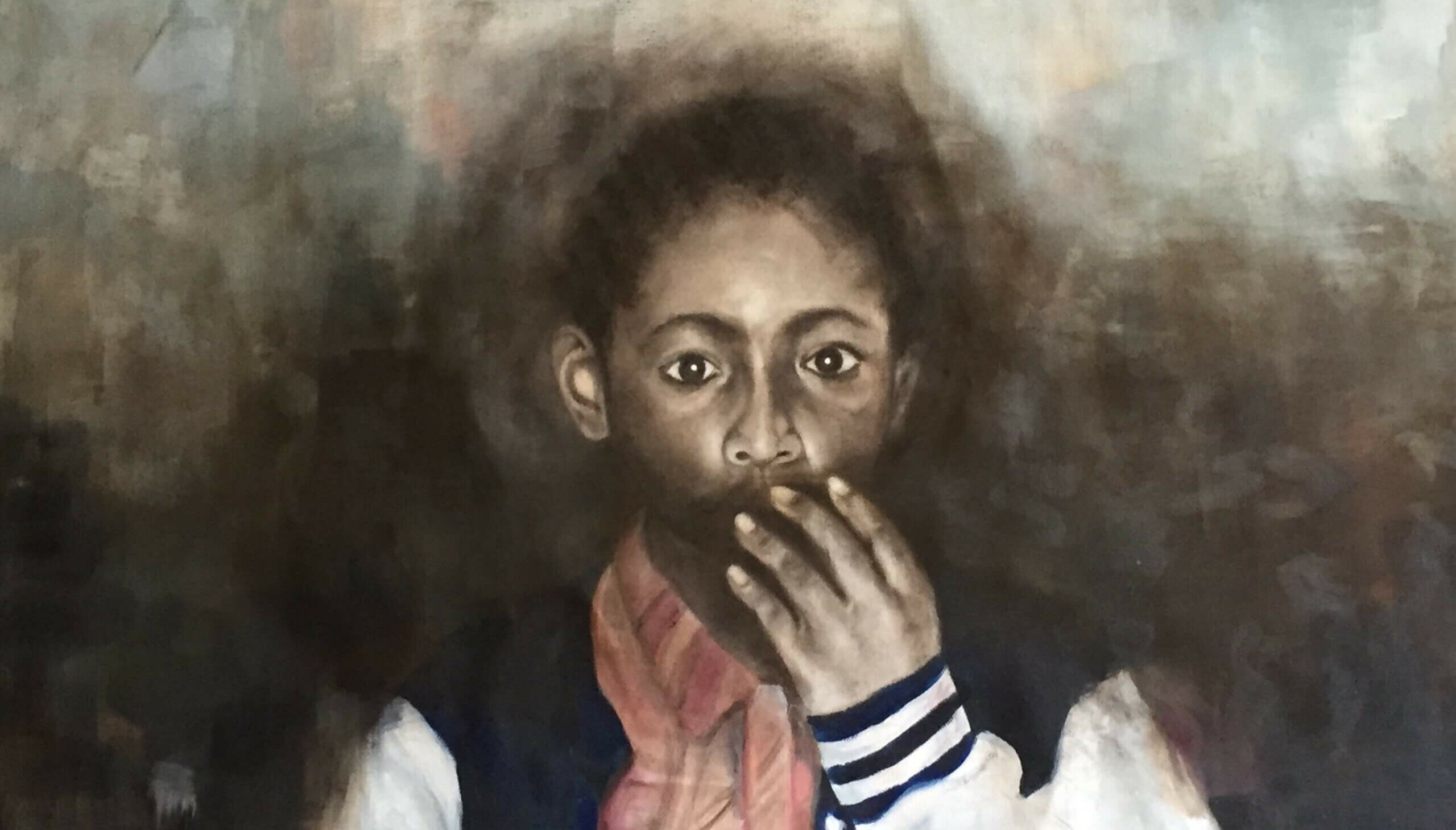 Portrait of Ella Kissi-Debrah by Gina Allen.  It has been produced with agreement of the late Ella Roberta Kissi-Debrah’s Estate. All images of Ella are copyright.

Artist Gina Allen highlights the personal stories of people affected by air pollution to help us visualise a huge problem we just can’t see. Gina and her academic collaborators Dr Lee Crookes (Urban Studies and Planning), Dr Maria Val Martin (Leverhulme Centre for Climate Change Mitigation) and Rohit Chakraborty (The Grantham Centre) hope that hearing first hand about the terrible consequences of air pollution will make us question some of our own personal choices.

“You’ve got to make the invisible visible”

When I read a news article about Ella Kissi Debrah, and that there may be a link between her illness and death at the age of 9 years old, and local air pollution, it was a huge shock to me – I’d never really thought air pollution in the UK might be that bad.

Working with Ella’s family, I wanted to describe some of Ella’s passions, personality and ambitions, directly using material that might have played a role in curtailing that vitality.  These images of Ella are made using dirt and grime I collected from the exhaust pipes and wheels of cars.  What looks like charcoal is actually filth from cars

As a Sheffielder, I’m very proud of the term ‘made in Sheffield’, but this did come at a cost.

..by the 1920s when we first got air travel in the UK, pilots could actually navigate their way up the country by looking out for the smoke on the horizon that marked out Sheffield, and this is actually recorded in the library archives.

…today’s clear skies are very deceiving.  And that’s essentially the problem.  You can’t see nitrogen dioxide, sulphur dioxide, and you can’t see micro-particulates.  But just to say we can’t see them doesn’t mean that they aren’t harming us.  We’re breathing these in all the time and they can get deep into your lungs and into your blood stream.

Dr Lee Crookes – teacher in the Department of Urban Studies and Planning, University of Sheffield

The sources of air pollution are now different from what they once were.  It’s now much more from vehicles rather than industrial sources, but the inequalities in exposure to air pollution across the city continue”…“There are also hotspots of air pollution in heavily congested areas in other parts of the city

As I repeatedly tell my students, we need to create places, neighbourhoods, cities that are designed for people, not cars.  But everyone, not just city planners needs to do their bit to minimise pollution.  Too many short journeys are still made by car, when people could be cycling or walking.  And to do that we need to develop a much better infrastructure for walking and cycling in the city.

As I got to know Ella’s mum, and she shared some family photos, it was clear that Ella was an active, sporty, bright, musical, and generally thoroughly vivacious child.

How can we be aware of, concerned about, and act to change something, that we can’t see?

I decided that I wanted to bring an ozone garden to Sheffield so that if people could see with their naked eyes what air pollution, in this case ozone pollution, can do to plants, they might imagine what it can do to our lungs.

You might have heard about good and bad ozone.  Ozone near the surface where we live and breathe is bad.  It’s produced from the reaction of hydrocarbons and nitrogen oxides that are emitted by cars and industry in the presence of sunlight.

An ozone garden is a garden which contains plants that are sensitive to ozone pollution.   Ozone near the ground is a very powerful oxidant which damages agricultural crops and plants in natural ecosystems.  It is easy to detect if a plant has been damaged by ozone, as that plant shows brown stippling.  So basically it’s more dark or yellow spots on the leaves.

There we grow snap beans, wheat and clover every year.  And we plant the garden with the help of pupils from local schools and run activities throughout the growing season until September.

Our plants get significantly damaged by air pollution every summer.

It’s been a strange process, getting to know Ella a little bit through talking with her family and working with these images, having never known her during her lifetime.  She seems to have had so much enthusiasm for so many activities, but one passion was clearly flying.  She dreamt of being a pilot with the Red Arrows when she got older.

We need to understand where air pollution is coming from, so for that purpose I think, sensors play a very big role.

If we can understand what’s causing the problem in real time, we can then address it.

Rohit Chakraborty, research student and Grantham Scholar in the Department of Civil and Structural Engineering, The University of Sheffield:

So if we create models and spatio-temporal maps, which is basically understanding the entire levels of pollution around us…High resolution maps could allow you to understand the air pollution levels where you are going.

But air pollution is not a technical problem, and it’s not a technological issue, we have to think [of] it as a social problem.  It needs to be tackled locally.  We need to understand burning garden waste is not a good thing to do.  And wood burners, of course I mentioned, it’s the biggest source of air pollutant for PM, particulate matters, in the UK right now.  There are things like that we have to understand, and when we start tackling in a local domain, that’s when nationally and even internationally, we can have better air quality overall.

Rohit Chakraborty, research student and Grantham Scholar in the Department of Civil and Structural Engineering, The University of Sheffield

There is always room for interpretation in an image, the viewer can’t ever really know what the subject of an image was thinking or feeling.  But in the photo that this image is based on, I think Ella was being pretty clear about how she felt about this particular hospital visit.

I started to bring more broken colour in to the background of the images of Ella that I based on photos from the later parts of her life, which reflects my interpretation of those photos – that things were becoming somehow less solid, less predictable for Ella.

While the legal cause of Ella’s death remains to be concluded, her case asks us all a huge question.  Knowing air pollution is present in our environment, do accept it, or do we act to change it?